Contact Salli directly to purchase one of her original paintings.

After her career in movies, Salli spent eight years living and traveling in Europe. She lived in a vicarage in England, a windmill in Holland, and a canal house in Amsterdam. Salli studied painting in a little village outside of Amsterdam, Laren, which was known as a “painter’s village.” There, M.C. Escher lived in a home for retired artists and Piet Mondriaan lived in the next village during the 1920’s. Later she studied at the Gerrit Rietveld Academie in Amsterdam. It was in the countryside, that Salli fell in love with the Dutch light, as pointed out by her mentor, Henk J. Slijper, seen streaming like spotlights through clouded skies. In Amsterdam, tulips adorned most windows in the solemn winters, and danced with the winter light. Returning to Los Angeles and reintegrating into American life, Salli earned a BFA in painting at the Otis Art Institute of Parson's School of Design. She worked as a Design Consultant in Beverly Hills, while completing studies in Expressive Arts Therapies.  Salli studied with Spanish painter Sebastian Capella and Raye Anne Marks in La Jolla, where she paints from her studio.

Local painter, world traveler, and former actress Salli Sachse (Soxsea) grew up in La Jolla as Salli Vining. Salli appeared in sixteen films, and yes, you saw her in the Beach Party movies with Frankie and Annette. She also modeled in hundreds of print ads and commercials and was featured in an article about “Beach Culture” in the August 2006 issue of Vanity Fair Magazine. 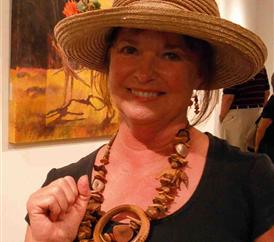